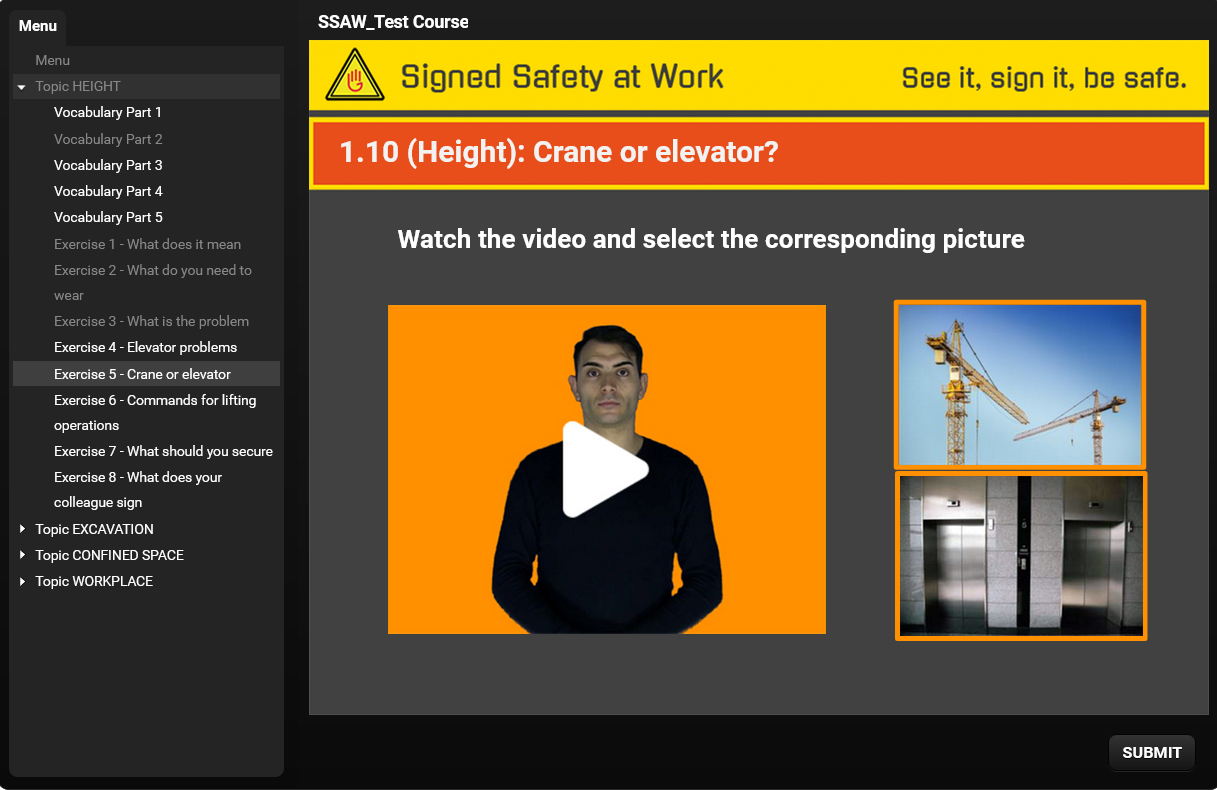 Demo versions in English, German and Italian are ready to be tested by the stakeholders

A lot of work has gone into developing the e-learning resource. After UNI-KLU had prepared a basic structure for the course, we had to decide on a program with which to realize it:  Articulate Storyline or LearnDash. It was agreed to do some test exercises with both programs in order to find out which one would be more suitable for the e-resource.

After discussing all the pros and cons, the partners decided to use Articulate Storyline because it was less text-based and more visual – a distinct advantage with a view to the target groups (i.e., D/deaf people and migrants, who might both have trouble with too much text). Another definite bonus was the fact that Articulate Storyline comes equipped with an in-built translation feature. Within the player, the designer can switch between different languages for the labels and feedback messages with a simple mouse click. As for the course texts, these can be exported to a word file which can easily be translated into the respective partner languages. Re-importing the translation into the course, all the texts will be changed automatically to the new language. In this way the original English course can easily be translated into the further course languages, namely German and Italian.

Because the project proposal specified that the course should also be used with smartphones, we had to take the smaller screen size into account while designing the contents. The lead partner UNI-KLU and the technical partner Bellyfeel did a lot of discussing and experimenting to decide what the course should look like. Finally, Bellyfeel created templates that could be imported into Articulate Storyline and on which the demo version is based. The dark background raises the visibility of the contents; due to the limited screen size on a smartphone, the number of videos per exercise had to be reduced to a maximum of three. We also wanted to use the icons from the glossary in the exercises.

UNI-KLU sorted the vocabulary from the glossary into thematic groups, i.e. excavation, workplace, etc. This will allow the users to choose the topics they need for their work and to concentrate on the respective vocabulary. It is up to the users to decide what and for how long they want to learn. Because of the topic approach, it is even possible to use the course whenever you have a few minutes on your hand, just to brush up on a few signs.

The vocabulary within each topic was turned into exercises thar are based on specific situations – e.g. a colleague has been buried – choose the correct video to call for help. As the number of vocabulary items varies between the topics, so does the number of the exercises. In the demo version, it ranges from seven to just a single exercise.

UNI-KLU and Bellyfeel discussed the visual design of the exercises; we agreed on the most useful exercise types and Bellyfeel produced nine exercise templates as well as templates for the start of the course and the results pages. They also suggested to add the necessary vocabulary, so that the users could learn or revise the videos they would need for each topic before doing the actual exercises. UNI-KLU then created demo versions of the first four topics: Height, Excavation, Confined space and Workplace. These were combined into a provisional course in English. German and Italian versions followed. For the videos, we used the International Sign ones because they would be understood by the majority of users.

Now the demo versions in all three languages are ready to be tested by the stakeholders: they will get a questionnaire and a link to the respective courses and their feedback will help to decide what the final course is going to look like.